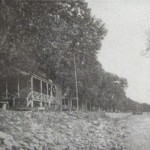 Founded in 1836 by Dr. Eli Reynolds and Harvey Gillett about three miles upriver from Muscatine, the village of Geneva was very nearly the county seat of Muscatine County. It was, in fact, designated as such by the Wisconsin Territorial legislature in 1837, but the bill was vetoed by Governor Dodge. It was pretty much downhill from there. When Gillett brought his wife to live with him, she wasn’t too impressed by what she found. Accustomed to the life of a New York socialite, she pretty much freaked out when she got to Geneva and saw the rough log cabin she and her children were supposed to live in. She stayed a year, then took the kids and went back to New York. Harvey stayed in Iowa and found a new wife, but Geneva never amounted to much.

If you like the content at the Mississippi Valley Traveler, please consider showing your support by making a one-time contribution or by subscribing through Patreon. Book sales don’t fully cover my costs, and I don’t have deep corporate pockets bankrolling my work. I’m a freelance writer bringing you stories about life along the Mississippi River. I need your help to keep this going. Every dollar you contribute makes it possible for me to continue sharing stories about America’s Greatest River!