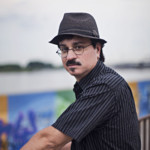 St. Louis author Dean Klinkenberg, the Mississippi Valley Traveler, has spent a decade exploring the backwaters and back roads of the Mississippi River Valley, from the Headwaters in northern Minnesota to the Gulf of Mexico. He’s worn out a car driving up and down the Great River Road and back up again (130,000 miles and counting), hiked to the tops of bluffs, paddled on the Mississippi River in kayaks and canoes, and floated in luxury for a few days as a guest lecturer on river cruises.

Klinkenberg has written extensively about his experiences along the Mississippi River. He is the author of the Mississippi Valley Traveler guides, which includes six books:

Some of the stories he encounters end up in the Frank Dodge mystery series. In Rock Island Lines, Dodge chases the legend of gangster John Looney, only to find his own life in peril. The second novel in the series, Double-Dealing in Dubuque, sends Frank Dodge on an assignment to write about boutique food in the Midwest, where he lands in the middle of a bitter feud between a boutique ice cream maker and a chocolatier.

Klinkenberg has also written articles for publications like Big River Magazine and the Minneapolis Star Tribune and maintains an extensive on-line guide at MississippiValleyTraveler.com.

Dean Klinkenberg grew up in the Midwest, developing wanderlust at an early age, thanks in part to a family that moved from Nebraska to Oklahoma to Kansas to Minnesota in a span of eight years. After finishing high school in southern Minnesota, he went to college in La Crosse, Wisconsin, discovering a home along the banks of the Mississippi River. Once he realized that he had a limited future as a professional bowler, he followed the Mississippi River south to St. Louis to attend graduate school in psychology. After several intense years researching HIV/AIDS, homelessness, and mental illness, Klinkenberg’s wanderlust reasserted itself. He left his university job in 2006 to begin a new career photographing and writing about the Mississippi River Valley.

Get a Free Book! 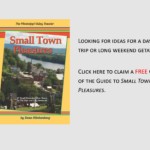 Listen to the Mississippi Valley Traveler on the Amateur Traveler Podcast