The Sauk and Mesquakie nations trace their roots to northeast Canada. Both nations were composed of Algonquin speakers who lived in stable villages; members frequently intermarried. Because of land pressure from advancing European settlements that sent them searching for new hunting grounds and a series of lost battles with the Iroquois, the Sauk and Mesquakie had little choice but to migrate west. The Sauk had a relatively peaceful migration, eventually settling along the Rock River where they built a village called Saukenuk (in present day Rock Island, Illinois).

In contrast, the Mesquakie journey west was catastrophic. At one time, they controlled a number of rivers used by French fur traders and used their leverage to extort goods from traders in exchange for safe passage. The French eventually tired of this and decided to solve their problem by exterminating the Mesquakie. The Mesquakie fled, naturally. After months on the move, they paused at a crude fort near Starved Rock in north-central Illinois. Their presence was soon detected, and they were surrounded by French and allied troops. On September 8, 1730, they tried to escape but were spotted. The resulting attack killed over a thousand men, women and children—nearly the entire nation. Those who escaped sought shelter at Saukenuk. The Mesquakie never really recovered from their near annihilation. They remained poor and lacked the resources to move to winter hunting grounds. Many ended up working in lead mines around Dubuque, mines that supplied European settlers and that would eventually entice more European settlers into the area.

The Sauk established a semi-permanent village along the Rock River near its terminus at the Mississippi River, calling it Saukenuk. Lieutenant Zebulon Pike visited the village in 1805 and 1806 during his exploration of the Upper Mississippi River. By the 1820s, Saukenuk had grown into an impressive site, designed in the shape of a right angle and laid out with wide streets to serve as home for nearly 5,000 people. The Chief lived in a large lodge at the top of the point. The streets were lined with multi-family lodges built of arched poles covered with bark or mats as large as 40 feet by 150 feet. Residents farmed 800 acres of land surrounding the village, growing corn, squash, beans, and melons. In the winter, the residents moved to hunting grounds near the Cedar and Des Moines Rivers, then returned in the spring to rebuild and plant anew. 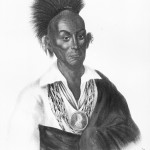 Saukenuk enjoyed a relatively brief heyday: the Sauk arrived in the mid-1700s and were forced out by encroaching European settlements by 1830. One group of Sauk, led by Keokuk, signed a treaty in 1829 to move to the west bank of the Mississippi. Black Hawk, however, led a separate group that continued to return to Saukenuk from winter grounds for the next two years. When he returned to Saukenuk in 1831, he found squatters living in the lodges at Saukenuk. The ensuing Black Hawk War and its settlement led to the permanent abandonment of Saukenuk and the relocation of all Sauk and Mesquakie to the West. The site of the once-flourishing village was the location of a failed venture to create the town of Rock Island City. Today, part of the former village site is in Black Hawk State Historic Site in the city of Rock Island.