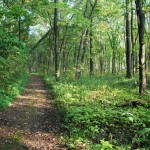 Once upon a time, a village named Sinipi was here

The flat path along the backwaters at today’s Fenley State Recreation Area was originally one of the main streets for the town of Sinnippi (a word that apparently means “lead ore” in an unspecified Native American language). The town was settled in 1831 by Payton Vaughn; by 1839 the town had a thousand residents and several thriving businesses, including a bank, a church, a mill, and a school. The village was located next to a swamp, which turned out to be the town’s undoing. Low river levels at the end of the summer in 1839 bred widespread disease and led to the abandonment of the town. A few remnants of building foundations are still visible. Mississippi City was supposed to be a neighbor of Sinnippi and was noted on some maps in 1837 and 1842, but the town was never developed.