Bemidji is in the northern reaches of one of the most northern US states: Minnesota. In two hours, you can drive to Fargo (North Dakota), Lake Superior, or Canada. Just 30 miles away, Itasca State Park, one of the oldest state parks in the US, is home to the body of water identified as the source of the Mississippi River: Lake Itasca.

Winter is unrelenting and often brutal. Three days before I arrived for a January visit, the temperature dipped to -29° F. The thing is, pretty much every winter Bemidji residents bundle up several times for temperatures in that range. A couple of years ago, the area was buried under successive 12” snowfalls—in April. Once the snow finally melts, residents plod through mud, and when the warm weather finally arrives and you can leave the house without three layers of clothes, the bugs awake. Not just any bugs, but swarms of thirsty mosquitoes, thousands of surly deer and horse flies, and enough no-see-ums to make even the most bug-tolerant person curse the existence of insects everywhere. And then it gets cold again. At least there are no more bugs.

In spite of this, the folks up here are friendly, resilient, and love being outdoors. Life goes on, regardless of whatever nonsense Mother Nature delivers on any given day. Winter sports are popular—snowshoeing, cross-country skiing, broomball, ice skating. Snowmobiles are a viable form of transportation.

Bemidji is also beaver crazy. The mascot of the local university, Bemidji State, is a beaver. A popular drinking establishment is the Thirsty Beaver. And, you can find a beaver on nearly every corner downtown.

Like many communities around the country, Bemidji commissioned an art project using a local icon—the beaver, naturally—and area artists went to town turning their blank beavers into something special. I was curious how they did, so I walked around downtown trying to find all of Bemidji’s beavers.

It was a cold day to be hunting for beaver, but, even in the frigid weather, they were easy to spot, even if partially buried under a sparkling white coat of fresh snow. Each beaver has its own character, although most artists chose to wrap their beavers in nature themes.

One beaver in particular, the one called Gaea by local artist Deborah Davis, provoked shock and dismay from many in town for looking too much like, well, a “beaver.” This prompted the city council to banish the beaver to a closet of shame. Alas, the public wanted its beaver back and a counter-protest that included a Facebook fan page for the controversial beaver inspired the city to change its mind and allow it to return. The beaver survived an amateurish attempt to deface it and is still standing proud on a downtown corner today.

Today’s Bad Decision: Not paying attention to the arrows on the “no parking” signs. I got a parking ticket today when I visited Bemidji State University. I saw the cop writing the ticket as I was walking out of the student union and slapped my head in disgust for not noticing the “no parking” sign with an arrow pointing directly at my car. As I approached the car and retrieved my ticket, the officer waved me over to her jeep. She took the ticket from my hand and said she would take care of it. I was so surprised, I could barely utter a thank you. In contrast, a few years ago, I raced back to my parked car in Syracuse (New York), arriving just a couple of minutes after the meter expired. A meter maid had just started writing a ticket, but my presence did not deter her from completing her sacred duty. As she handed me the ticket, she said “Welcome to Syracuse.” And how do I thank the nice people in Bemidji? By making cheap beaver jokes.

Here’s a few photos from Bemidji: 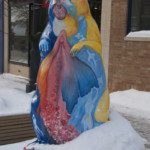