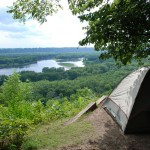 I’ve had two chances to camp this summer at Nelson Dewey State Park near Cassville, Wisconsin, the park that is named for Wisconsin’s first governor. Dewey was a remarkable man. He gave up a cushy gig in the family lawyering business to go west, became rich through wise investments, raised a family, but died alone and broke.

Dewey was born in 1813 in Connecticut into a family with deep roots in America. Young Nelson studied law in his father’s firm, then left home in 1836 to get a piece of the action in the booming Western frontier. He landed a job with a firm trying to make Cassville the capital of the new Wisconsin Territory. The company had built a large brick building in Cassville that they hoped would house the Territorial legislature (now known as the Denniston Hotel), but Madison was selected as the Territorial capital by a single vote, sending Cassville into a deep stagnation. Dewey, however, forged ahead with his career, winning an election for Register of Deeds for Grant County, then getting an appointment as Justice of the Peace. He moved to Lancaster where he set up a law practice, but accumulated a mass of wealth by investing in lead mines and land. Continuing his political rise, he won a seat in the Territorial Assembly, then in 1848 he was elected Wisconsin’s first governor. He was only 35 years old. 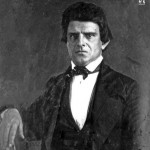 At the end of his first term, he married the daughter of a prominent judge, Catherine Dunn; they had three children but lost a young son to cholera. Dewey served a second term, then moved to Cassville where he cleared up a very messy land ownership situation that had been holding up the town’s development for 20 years. He restored the Denniston Hotel (while living there), then built an elegant country manor he called Stonefield. Catherine was never really fond of country life, though; when their daughter moved to Madison to start college, mom followed and never returned. 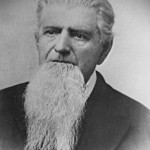 Dewey and his beard

Stonefield was badly damaged by a fire in 1873; Dewey lost much of his fortune in the economic depression that year, so he couldn’t afford to restore Stonefield to its former elegance. Nelson Junior left home in the 1870s, went west, and rarely wrote home. Nelson Senior lived alone the last ten years of his life—the last five years he had no contact at all with his family. Dewey suffered a stroke in February 1889 while arguing a case in Lancaster. Friends secured a room for him in the Denniston Hotel where they cared for him until he died five months later. He was buried in Lancaster next to Charles, the young son he lost to cholera. The man who was once enormously wealthy, who helped create a government structure out of nothing for the nascent state of Wisconsin, died in a rented room in the hotel he once owned. I don’t have any idea what kind of man Nelson Dewey really was, but everything I’ve read so far suggests that he was a decent, giving man who deserved a better end to his life.