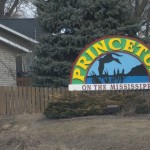 Princeton is an unusual river town, one that has historically been less dependent on the river than its neighbors. It found new life in the late 20th century as a bedroom community for commuters working in the Quad Cities.

Your best bet for information about Princeton is to stop at the library (see below).

Thomas Hubbard and Israel Atherton were among the first settlers; each ran a ferry to the Illinois shore. Brothers Giles and Haswell Pinneo arrived in 1836. According to one story, when Giles reached the Mississippi River, he hopped on a log and paddled his way to the other shore where he set up his home. Haswell built a cabin in what is now the south part of Princeton; this area became known as Pinneo’s Landing. Giles built northwest of Haswell; that area became known as Pinneo’s Grove. The villages of Pinneo’s Landing, Elizabeth City, and Pinnacle Point merged into the new town of Princeton in the mid-1840s and the village was formally incorporated in 1857; it had nearly 1,000 residents by 1860. Princeton had a stagecoach connection to Lyons (now Clinton) in the mid-1800s. A standard journey for the 40-mile roundtrip route took about 11 hours, including an hour for lunch in Princeton, assuming the road through the Wapsipinicon River wasn’t worse than its standard muddy mess.

Even though Princeton counted many riverboat pilots among its early residents, its economy was tied closely to agriculture. Throughout most of the 19th century, wheat was the crop of choice, but a series of dry summers in the late 1890s led most farmers to switch to other crops such as corn, oats, or hay. Princeton’s population has bounced around like a ping pong ball, dropping to 400 by the late 1880s before rebounding in the 20th century. After World War II, Princeton’s proximity to the Quad Cities spurred residential expansion and the population grew again.