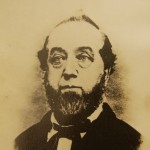 In 1827, Lucius Wells built a cabin about a mile north of where Henry McNeal would settle in the following year. Wells  began ferry service to Iowa in 1829; his horse-powered boat had room for two teams of horses and two wagons. Lucius also built a sawmill a couple of years later. The area around his home became known as Well’s Ferry, naturally. When Milan was platted, it included the former Well’s Ferry. What was once Well’s Ferry and Milan is now part of Hampton.