History
William Denison and family arrived in 1827 when the only other inhabitants were Sauk and Meskwaki Indians. They generally got along well; the Denisons even hosted both Keokuk and Blackhawk in their home a few times. Denison’s daughter, Julia, was a beauty who caught the fancy of many Native American men, some of whom offered the Denisons several ponies for the right to marry her. The highest offer was 30 horses, but even that generous offer wasn’t enough to get the Denisons’ consent. When hostilities broke out with the Blackhawk War, the Denisons were warned by Blackhawk to leave; they obliged and relocated to Nauvoo for a while.

Denison sold two-thirds of his claim in 1834 to Elijah Iles and Edward Burrall. Iles was from Springfield and worked with an agent named Peter Van Bergan, who possessed a promissory note owed by one Abraham Lincoln. That may explain how Lincoln, then the Deputy Surveyor for Sangamon County, was chosen to conduct the first survey of what became New Boston. Lincoln completed the survey in two days at the end of September 1834, platting 16 blocks that aligned with the river. The Mississippi makes a wide curve at New Boston, so as blocks and streets were added in later years the city’s grid assumed a wagon wheel shape that made for some curious five-way intersections. Don’t try to find the first four blocks on the original plat, by the way (including 1st Street); they were submerged when the Corps built the lock and dam system.

William Drury arrived in New Boston in 1833. His family had quite an impact upriver at Illinois City and Drury’s Landing. William Drury, just 24 years old when he moved in, played a key role in getting the town up and running and profited handsomely for his efforts. He served as County Recorder for many years, and he and his business partner and brother-in-law, Levi Willits, opened a dry goods store and the first pork processing facility in the area. He retired from the retail trade in 1853 and switched to real estate, which made him even wealthier. He built a large country house in 1855 called Verdurette that he surrounded with a park populated by deer, elk, and bison; the house is still around today, just without the animal park. Drury also helped found Farmers National Bank in Keithsburg in 1871, serving as bank president for a while.

Denison got a license to operate a ferry in 1835. Here’s the fare schedule for those early years: $1.50 for a 4-horse wagon, $1 for a two-horse wagon, $0.50 for a man and a horse, 18 ¾ cents for one horse or for one head of cattle, 6 ¼ cents for each sheep or hog. Carrying around those quarter-pennies must have been really been a pain. New Boston would have ferry service for the next 139 years, although the fares were a bit higher in 1974 when service finally ended.

New Boston grew into a busy port town and regional commercial center thanks to an early lumber boom and shipping on the Mississippi. Packet boats made regular stops, and residents could take a day trip on the river to Burlington or Davenport. Main Street was a busy place; folks from nearby places traveled to New Boston to shop at its grocery stores, buy hardware, and do their banking. Showboats parked on the riverfront and entertained residents in summer. Susan B. Anthony visited New Boston on April 9, 1878 to lecture on women’s suffrage. 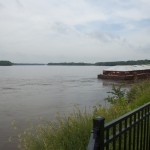 If you lived in 19th century New Boston, you might have worked at the Dewey Stave Factory making barrels or the Seastone Wagon Company building carriages. If you farmed, watermelon would be a good choice (and still is); it grows well in the area’s sandy soil. Fishing was another option. New Boston was a commercial fishing center for at least a century, with Mississippi River catfish one of its most popular products. In the winter, you could earn some extra cash by harvesting ice from the frozen Mississippi. By the early 20th century, you had another option: the New Boston Button Factory, which employed a couple dozen men who churned out buttons from the shells of river mussels. The used shells were eventually crushed and used to pave the streets of New Boston, a much friendlier surface than mud or dust.

New Boston’s fortunes began to change, though, when the railroads began to replace steamboats in the transportation network. Estelle Willits, born around 1900, reflected on the New Boston she knew in her 85 years:

We were a big city, a river city, then the railroad came and took over the river traffic and the boats stopped. Then the railroad left us and now the boats are back, this time pleasure boats. (From Mercer Remembers: A History of Mercer County; Published for the Sesqui-Centennial, 1835-1985)

By the time New Boston became the first city in Illinois to elect a female mayor (Grace Histed in 1954), the city’s fortunes had been declining for a while. The high school closed in 1960, and the gradual closures of backbone businesses like banks and grocery stores continued through the 1990s.

Today, New Boston is struggling to rejuvenate its once-bustling downtown. The city operates a popular campground near the river, and the boat ramp is a busy place on weekends, but the city itself has little industry. Most residents are either retired or commute to work in Muscatine or the Quad Cities.

Exploring the Area
If you’re like me and interested in things like old buildings, the drive south to New Boston along County Highway 14 has a number of interesting old barns. Some are falling down and may not last much longer, but there is quite a variety of styles.