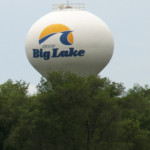 Big Lake is one of the communities on the exurban fringe of the Twin Cities metro area; visitors will find a couple of reasons to pull off the highway, especially if you like craft beer.

Early settlers in the area, arriving as early as 1847 included several Vermonters and other New Englanders. Joseph Brown was among that early group; he built a home on Big Lake that he called Humboldt that served as the county seat from 1856 to 1865. The park and pavilion at Big Lake was a popular retreat for tourists in the 1920s and 1930s who wanted a quick vacation. Almost from the beginning, Big Lake residents described their town as a community of commuters, although today’s highways make the trip easier than yesterday’s trails.