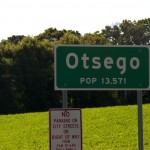 Otsego is one of the communities on the exurban fringe of the Twin Cities metro area; visitors will find a couple of reasons to pull off the highway, especially if you like quiet walks next to the river.

Ho Chunk Indians had a village around here in early 1850s (their reservation was up by the Watab River). The village of Otsego got going in fits and starts. It was surveyed and platted in 1857 and even got a sawmill that year. It was named after Otsego, New York, which is a township, county, and the first name of the village now called Cooperstown that became famous for being the home of the National Baseball Hall of Fame. Samuel Carrick started ferry service between Elk River and Otsego in 1854. Most of the early settlers were New Englanders. David Ingersoll arrived from Maine in 1854 and started a brick factory on the Mississippi that lasted until 1890. Most folks in the area were farmers, however.

The Panic of 1857 drastically slowed the village’s development. The village got a post office in 1856 but it closed in 1904. Otsego’s kids went to high school in Elk River. The city roared to life in 1990 when the entire township was incorporated as the City of Otsego. Because it was organized so recently, it has an unusual setup: Otsego has no post office, three school districts, six zip codes, three different phone companies, no fire department, and police service is provided by the county sheriff. Most residents commute to work elsewhere.