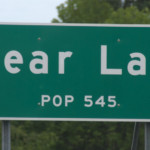 Clear Lake began as a trading post around 1848. John H. Stevenson (a native of Pennsylvania) was the first European to put down stakes; he was followed by others from Pennsylvania and a few New Englanders. The village was platted in 1856, but the plat was abandoned when Clear Lake was not chosen as the seat of Sherburne County. The coming of the railroad in 1867 provided a small boost, but the village was not incorporated until 1900, at which time it had 176 residents. A pickling plant and a canning factory were among the early businesses.

The 62 acres at the Clear Lake Scientific and Natural Area (651.259.5800) are heavily wooded, with much of it in the Mississippi River floodplain. There are no facilities and no groomed trails, so be prepared to hike through thick brush at times. From Clear Lake follow 90th Street (County Road 57) for 1¾ miles west to 58th Avenue (County Road 57); drive south on 58th Avenue for 0.7 miles; there’s a pull-off on the west side of the road where you should park. Don’t park on 58th Avenue.

**Clear Lake is covered in the Headwaters Region Guide; other places in northern Minnesota are covered in Road Tripping Along the Great River Road, Vol. 1. Click the link above for more. Disclosure: This website may be compensated for linking to other sites or for sales of products we link to.

Where to Eat and Drink