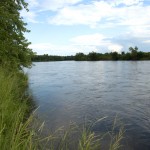 The city of Ramsey has been through explosive growth in the past generation, going from 1,179 residents in 1960 to almost 24,000 in 2010. Virtually all of that growth has been residential, as Ramsey developed into a bedroom community for the Twin Cities. The city has been around for a while, though.

Mississippi River near Dayton and Ramsey

Once the site of a trading post, permanent settlers began arriving in 1852. Originally known as Itasca, the village was platted in 1852. It grew to include a hotel, coach stop, railroad station, and a post office. The village was busy enough to be in the running for the territorial capital, although it eventually lost out to St. Paul. Itasca was renamed Ramsey in 1858 in honor of the first territorial Governor, Alexander Ramsey. In 1974, the entire township of Ramsey incorporated as a city.