NOTE: See the Quad Cities overview for regional information on tourism centers, festivals, and getting around.

Early History
Moline is another municipality that was founded on land originally owned by Antoine LeClaire. He sold several parcels to early settlers, many of whom were migrants from New England. Among them was David Sears, who built a dam between the mainland and Rock Island in order to power a mill. It opened in 1838 and worked out so well that he built two more. These early mills may have provided the inspiration for the town’s name, which the early leaders chose because they believed it was derived from a French word for “Milltown.”

John Deere moved his primary factory to Moline in 1848 because of the location’s proximity to coal, transportation, and a good supply of workers.  The company grew quickly and its plows, and the John Deere name, spread throughout the Midwest. One of his early partners was John Gould. Deere bought out Gould’s interests within a few years but Gould went on to establish a furniture factory, then a sawmill, before becoming a bank president.

The railroads reached Moline in 1854. The following year, Moline re-incorporated with strict liquor laws and new powers to maintain the city’s thoroughfares. The city required able-bodied males between twenty-one and fifty years old to work on road projects up to three days per year. Moline’s early leaders, proud of their Puritan heritage, reportedly encouraged people with inferior values to settle elsewhere, like in Rock Island.

The factories that lined Moline’s riverfront included workers of many European nationalities, including Swedes, Germans, Irish, and Belgians. The Belgian community grew into the second largest in the United States; for many years Moline was home to a Belgian consulate. With the exception of the Belgians, most factory workers actually lived in Davenport or Rock Island, not Moline.

In 1900 Moline had about 22,000 residents, about one-quarter of whom (over 5,000 men) worked in factories. Fully one-third of the factory workers worked at John Deere and another 1,200 at Moline Plow. No wonder Moline was nicknamed “Plow City” and “John Deere Town.” While many of those factories have since closed, John Deere forges ahead and is still a major presence in the city.

Attractions
Who says America doesn’t have any cool ruins? The atmospheric setting of Sylvan Island (1st Ave. @ 2nd St.; 309.736.5714) was the site of the mammoth Republic Steel Works that operated from 1894 to 1956; all that remains is the concrete foundations that ornament the island with post-industrial ruins. If you are lucky, you will be exploring this place on a foggy, slightly cool day around dawn or dusk.

Moline has a cluster of historic houses worth exploring. The two most impressive houses are the Deere-Wiman House (817 11th Ave.) and the Butterworth Center (1105 8th St.) and they could not be more different. The Deere-Wiman House is an exceptional example of nineteenth century Victorian stylings, with gorgeous walnut paneling on the first floor, a music room complete with a pipe organ, and one of the earliest multiple head full-body showers. And you thought the Victorian era lacked sensuality. In contrast, the Butterworth Center feels like a medieval castle when you enter the foyer, an impression that is cemented after entering the stunning library. Like the Deere-Wiman House, the Butterworth Center has a pipe organ, but, then again, whose house doesn’t? Both houses are open for guided tours Wednesday through Friday afternoons or by appointment (309.743.2701).

Across the street from the Deere-Wiman House is the Rock Island County Historical Society (822 11th Ave.; 309.764.8590), which not only hosts an impressive genealogy and local history collection but also manages a house and a carriage museum. The house itself is not nearly as impressive as the two Deere family houses (there are few original furnishings) but has interesting displays of local history, including replicas of nineteenth century dentist’s and doctor’s offices and an 1840s-era bedroom.

Nearby Velie Park (11th St. @ 11th Ave.) was named for Willard Lamb Velie, grandson of John Deere, and founder of the Velie Carriage Company. From 1908 to 1928 they produced seventy-five thousand cars, but the company came to an abrupt end in 1929 when Willard and his son died within a month of each other. The park has a nice overlook of Moline and the Mississippi River.

The Center for Belgian Culture (1608 7th St..; 309.762.0167) has a small collection of exhibits about Belgian life in the Quad Cities, with displays about homing pigeons, lace, and a game called Rolle Bolle, which you can still play at Stephens Park (15th Ave. @ 7th St.). The Center sponsors a genuine Belgian waffle breakfast on the first Saturday of the month at the Friend Circle Hall (701 18th Ave.). 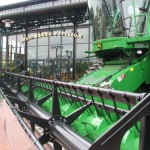 At the John Deere Pavilion (1400 River Dr.; 309.765.1000), you can climb into the cockpit of a giant 9970 Cotton Picker and get a new perspective on the world. A number of different models of tractors, combines, and other giant farm trucks are on display; you are encouraged to touch and climb into the seats of most of them, so I did. Next door to the pavilion is the John Deere Store (1300 River Dr.; 888.231.1236/309.765.1007), where you can buy model tractors, T-shirts, hats and other memorabilia, all with the John Deere logo, of course. Just across the street, between the convention center and the Radisson Hotel, is the sculpture Spirit of Place that was installed to mark and honor the s