Putnam Gray and His Castle on the River

In the late 1800s, an eccentric inventor and long-time riverman built a home next to the Mississippi River near Minneiska, Minnesota. Putnam Gray’s home  was so unique that people talked about it for decades, and people like me are still fascinated by it today.

Gray was born in Ohio in 1833 and began working on the Ohio River as a young man, guiding coal-filled barges to markets in New Orleans. He moved to Minnesota in 1856 to farm, but farming wasn’t his thing, so he returned to the river. He told an interviewer:

I worked in the south until the outbreak of the Civil War and then returned to the north to take a place in the ranks of the Federal army. With the 38th Illinois I spent three desperate years, filled with perils and adventure, but always crowded with action, uncertain and deadly as it was. Among some of the incidents which I remember is the capture, unaided, of two rebels.

After the war, he married Sarah Abrams; they had five children. Sometime in the 1870s he began building that distinctive house. He did it on the cheap, buying cut lumber that others had salvaged from the river, plus a few materials that happened to float by. He created a unique architectural style that some called “Victorian packrat.” 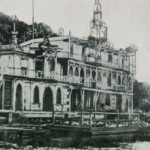 The structure, in its perpetually unfinished state, looked more like the grounded shell of a steamboat than a house. It rose three stories high on a low bank. The front had a tower topped with tinker toy-like gazebos topped with what looks like three Gothic window frames nailed together to create a crown. Balconies ran the length of the structure on the second and third floors. Some of the walls lean, and the whole thing looks ready to explode in flames if a stray spark drifted by. I’d love to know what the inside looked like, but I haven’t been able to find any photos or descriptions.

The house was such a landmark that it showed up on postcards of the era. Folks also believed that the house was haunted, and not just because it looked like something from another dimension. Gray’s daughters helped promote the idea. When the spirit moved them and they heard a boat approaching, they’d wrap themselves in sheets and dance around the balcony. As the boat’s light passed over the shrouded girls, passengers must have thought that they just caught a glimpse of some tortured souls.

Gray’s house didn’t have all that long a life. Sometime in the early 1900s, it collapsed, burned, sank, or returned to the alternate dimension from whence it came. No one seems too certain about the details. Putnam outlived Sarah but in 1913—at the spry age of 80!—he married again, one Bessy Shively of Winona. Gray died in 1921 in Minneapolis.

Putnam Gray left his mark in other ways, too. Some believe he invented what was later called the Ferris wheel. In 1892, he and his sons, Lafayette and Verenzo, exhibited a round wheel at a Winona fair. An operator turned a crank by hand that turned the wheel and gave passengers a merry ride up, down, and around. There’s an old story that George Ferris just happened to be in Winona when Gray was giving rides on his vertical merry-go-round, although Ferris presumably did not witness the malfunction that resulted in a couple of passengers being dropped from the top of the ride and injured. Ferris, as the story goes, followed Gray to Fountain City and convinced him to sell the rights, which Gray did. Ferris built a wheel on a bigger scale and exhibited it at the Chicago World’s Fair in 1893, and the rest is history.

**Want to know more about the places along the Mississippi River? Check out Road Tripping Along the Great River Road, Vol. 1. Click the link above for more. Disclosure: This website may be compensated for linking to other sites or for sales of products we link to.

If you like the content at the Mississippi Valley Traveler, please consider showing your support by making a one-time contribution or by subscribing through Patreon. Book sales don’t fully cover my costs, and I don’t have deep corporate pockets bankrolling my work. I’m a freelance writer bringing you stories about life along the Mississippi River. I need your help to keep this going. Every dollar you contribute makes it possible for me to continue sharing stories about America’s Greatest River!