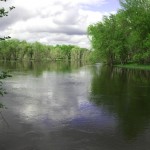 The unincorporated village of Jacobson acquired its name through habit and repetition rather than any formal process. It was built along what was once a popular route traveled by fur traders and Indians, along the Swan River to the Mississippi River.

The first village here was called Mississippi Landing. It was founded in 1892 as a base for the logging operations run by Ammi W. Wright and Charles H. Davis who owned the Swan River Logging Company. They figured out that the landing would be a good place to assemble cut timber and float it down the Mississippi to sawmills. The most accessible trees in the area had already been logged, but Wright and Davis built a railroad line up to the woods around Gardner and Hibbing, so they could haul cut timber from there to the Mississippi River. They were pretty successful. The camp had a boarding house for up to 60 single men and a few small homes for married men, plus a company store, barns for horses and oxen, and a large vegetable garden. When they ran out of supplies–liquor, for example–a foreman might fire up a locomotive and drive it to the nearest town to resupply. Even though the company kept Mississippi Landing going until 1928, the logging company’s best years were roughly from 1892 to 1912.

Mississippi Landing had regular steamboat service for many years, especially between 1870 and 1920; it was one of the stops on the route between Aitkin and Grand Rapids. Riding the whole route cost about $2.40; if you were hungry, you could buy a meal on the boat for twenty-five cents. The steamboats burned wood for fuel; when they stopped to pick up a cord, the passengers would line up to help move the wood from shore to ship. After the steamboats stopped running, Harry Riggs used his motorboat for a few years to ferry people and goods between Mississippi Landing and a spot downriver near Verdon.

One of the boats that made regular runs was the steamboat Fawn. Its service ended in 1894 when it hit a snag and grounded at the mouth of Swan River. Many people believed the crash was intentional, an attempt to collect insurance money. The railroad put pilings around the boat to prevent logs from slamming into it and there it sat, collecting sand and rotting until finally in 1942 it was blown up and salvaged for scrap.

Paul Jacobson—there’s the source of our name—started a post office in 1901. He bought property at a nearby village called Hiawatha, just east of Mississippi Landing. A small group of investors had platted Hiawatha in 1894 hoping to feed off the success of the lumber operation. Jacobson was the only person who bought a lot, though—the railroad worked hard to ensure the village stayed cut off from all transportation links—and the investors lost their money.

Jacobson ran a general store for a while, then bought a farm and folks began to call the little settlement around there by his name (mail was often addressed to “Jacobson’s post office”). By then, folks in the area were turning to farming: potatoes, carrots, cabbages, root vegetables, those kinds of crops. Yet another plat was filed in 1928, this one called Bridge Park, which worked out pretty well. That’s the collection o