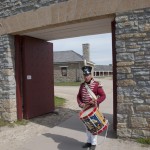 Fort Snelling is a landmark in the Twin Cities, one with a mixed record at the center of the introduction of European settlers in the area and the destruction of long-time Native American settlements. The historic site and the state park at river level both do a better job now of telling a more complete story about the area’s history.

In the Dakota language, a place where two rivers meet is called bdote. One bdote is revered above all others, the place where life began in Dakota legend, the bdote of the Minnesota and Mississippi Rivers. For generations of Dakota, the area around this bdote was the place where the Dakota gathered for councils, religious ceremonies, and burials. As Europeans moved into Dakota lands, great tragedies would also take place at this bdote.

After the Louisiana Purchase, the US had a lot of new land to explore and interests to protect. Lewis and Clark headed west in 1804 to explore territory that was largely unknown along the Missouri River, while Lieutenant Zebulon Pike led a group of 20 men north from Fort Bellefontaine (near St. Louis) in 1805 into territory that was familiar but still full of mysteries. Pike’s expedition didn’t have the success of Lewis and Clark—he identified Cass Lake as the headwaters of the Mississippi (he was wrong) and many of his observations were off because he packed few scientific instruments—but he did get one thing done: he purchased land from the Dakota that would eventually be used for Fort Snelling, land that included the bdote of the Mississippi and Minnesota Rivers.

In retrospect, even that one accomplishment was probably not entirely legitimate. Only two of seven chiefs present at the negotiations actually signed the treaty, and it’s not clear that they really understood what they were agreeing to. I find it hard to believe that the Dakota leaders would willingly agree to give up territory that was so central to their life, but, what do I know. Regardless, the treaty ceded 155,520 acres defined as:

From below the confluence of the Mississippi and St. Peter {now Minnesota}, up the Mississippi to include the Falls of St. Anthony, extending nine miles on each side of the river.

The purchase price wasn’t specified in the treaty, although it was probably worth in the neighborhood of $200,000, or at least that’s what Pike thought. When Congress finally got around to ratifying the treat